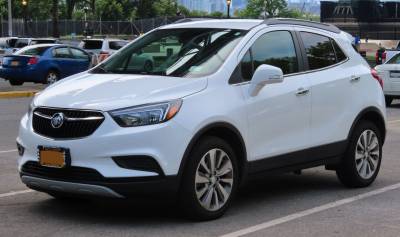 A recent study has produced a list of cars that get the least number of tickets and some of the results are astounding. At Mike’s Auto Body, we all hate getting tickets just like anyone else, so we were surprised when we saw this list.

In their study held last year, Insurance.com studied the online quote information submitted by 323,349 drivers to find out which vehicles get the least tickets. With a deluge of pertinent information about car ownership and driving habits, this study has been praised for its depth.

Of course, ultimately, it’s the driver that gets the ticket, not the vehicle. But this list reveals the fact that nicer cars are less likely for getting pulled over:

1.) Buick Encore: That’s right–if you own a Buick Encore, you probably won’t get a lot of tickets. 3.2 percent of all drivers of this crossover vehicle reported that they have been written up while operating an Encore.

2.) Lexus IS350: The trendy Lexus IS350 sees only 3.4 percent of its owners with speeding tickets. Interestingly enough, the IS250 with inferior performance gets more drivers in trouble with a whopping 21.6 percent of IS250 owners with tickets.

3.) Acura ILX: The Acura ILX might not be the successful car that the Japanese automaker anticipated, but at least its owners are staying out of peril. Of those surveyed, 5.6 percent reported having tickets while operating an Acura ILX.

4.) Cadillac ATS: The Cadillac ATS is a literally ticket-free vehicle, with only 6.2 percent of its owners having reported having tickets. Cadillac CTS owners, conversely come in at approximately 17.1 percent. Unfortunately, Insurance.com doesn’t have enough data to break down between the standard ATS versus the ATS-V, since it would be interesting to see exactly what that extra power does for a driver when it comes to following traffic laws.

5.) Chevrolet Express: An exceedingly low percentage (7.7 percent) of Chevrolet Express drivers have received tickets while operating this vehicle. Both cargo/passengers’ vans are likely the least surprising to show up on this list.

I guess one of the main messages here is to drive safely, regardless of whatever vehicle you drive, and you will not get tickets. If you’re going out to buy one of the cars on this list hoping that you can speed and not get a ticket–think again.

Simply put: they just take care of you.

Mike’s Auto body is a family owned and operated business. This family feel transfers through their employees and the customer… END_OF_DOCUMENT_TOKEN_TO_BE_REPLACED

O.k. So in early March I brought my wife’s Jetta in for about $3K worth of body damage repair. My first time here. I yelped them and gave them five stars.    Part o… END_OF_DOCUMENT_TOKEN_TO_BE_REPLACED

I was involved in car collision and even if it was not my fault I was a total nervous wreck. My insurance send me to Mike’s Auto Body in Walnut Creek. Nobody could … END_OF_DOCUMENT_TOKEN_TO_BE_REPLACED

I appreciated the customer experience at Mike’s Auto Body from beginning to end for the company’s highly personable and thorough approach. I was impressed by the one… END_OF_DOCUMENT_TOKEN_TO_BE_REPLACED

As luck would have it, in 2010 I had bought a brand new car and weeks later hit a pedestrian crossing a parking lot exit. I had brought my car to this location to hav… END_OF_DOCUMENT_TOKEN_TO_BE_REPLACED

I imagine it must be a tough job working at a company like Mike’s Auto Body.  Specializing in estimates and repairs to cars post-accident, you’re the automotive Grim … END_OF_DOCUMENT_TOKEN_TO_BE_REPLACED

Honestly there are sometimes that 5 stars aren’t enough to convey the absolute perfection in customer service, communication, quality and timeliness. THIS is one of t… END_OF_DOCUMENT_TOKEN_TO_BE_REPLACED

I brought my car to Mike Rose after someone hit my car in a parking lot. My car already had damage in that area from a previous accident that I had not fixed. Damon… END_OF_DOCUMENT_TOKEN_TO_BE_REPLACED

Came here to get some dents looked at (door dings specifically). Great staff, super friendly and reasonably priced. Trusted them pretty quickly and didn’t get the fee… END_OF_DOCUMENT_TOKEN_TO_BE_REPLACED

Customer service here is excellent. I recently dropped my vehicle off for repairs. The front desk staff was great. The ladies were all very nice and I was very please… END_OF_DOCUMENT_TOKEN_TO_BE_REPLACED