With summer right around the corner, the people at Mike’s Auto Body are offering a series of helpful tips about driving and safety on the highways throughout these hotter months. As you travel this summer with your family, please make sure the little ones are always safe within your vehicle.

One great thing is that children’s car seats are better and safer now than ever, because they’re utilizing new technology and embracing recent innovations in plastics and lighter metals, such as aluminum, for example.

“Car seats are one of the biggest success stories we have in auto safety right now because the newer ones are incredibly effective at reducing injuries and fatalities to children,” says Kristy Arbogast, Ph.D., Engineering Core Director for the Center for Injury Research and Prevention at the Children’s Hospital of Philadelphia in an article that appeared recently on Edmunds.com.
The newest car seats can do just about everything short of actually babysitting your child. But, until an electronic nanny hits the market, these new car seats are as cutting-edge as they can possibly be. They’re called “Smart Seats” and part of an evolution led by child safety seat manufacturers that are going way above the current car seat standard to develop even safer seats. 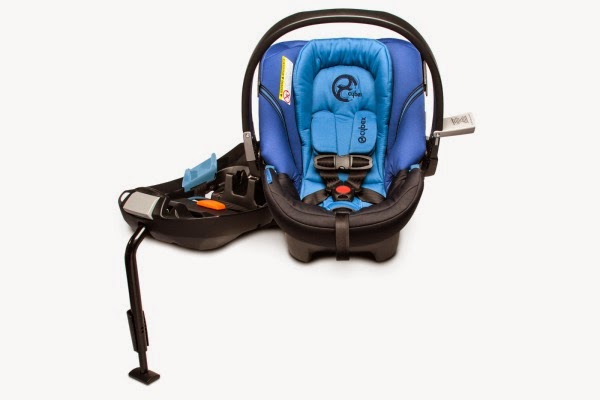 Here is the newest, safest and most popular of all the high-tech child car seats available on the market today, with the latest side-impact safety innovations to protect the youngest passengers. It’s called the Cybex Aton 2 and it is getting amazing reviews by consumer publications worldwide. It’s a rear-facing car seat for infants 4-35 pounds (preferably until age 2), up to 30 inches tall and it retails at $299.
This German-engineered rear-facing-only infant car safety seat is the first to offer the linear side-impact protection (LSP) system, which is designed to absorb more of the energy of a side-impact collision. To engage the LSP system, you simply flip out the wing on the side of the car seat near the car door after clicking the car seat into its base. (You don’t need to use the LSP system if you install the car seat in the rear center spot, which is the safest car seat position.) The plastic wing helps transfer the energy of a crash into the shell of the car seat so a child isn’t jostled around as much. Safety testing by the manufacturer found the LSP system increases safety by 40 percent in a side-impact collision.
“Cars are entering a new age, so why not kids’ car seats?” Peter Bizaca, Marketing Manager at Mike’s Auto Body explained. “We get second and third-generation customers here every month and many of them have very young children and that’s why we’re happy to see these developments in car seat safety. Anything that can save lives and make us all safer, it’s a win-win.”
The Cybex Aton 2 also features a load leg, which is commonly found in European car seats. The leg, which extends from the car seat base to the floor of the car, affixes the car seat base for added stability in a frontal crash. An added bonus: The seat itself is lightweight, weighing just 9 pounds because the release mechanism, which typically adds heft to a car seat, is in the base that’s attached to the vehicle seat, not the car seat itself.
Other new high-tech “Smart Seats” that have received top reviews include the Safety 1st Advance 70 Air ($189.99) and the Britax Advance 70-G3 ($379).
Protect you most-prized cargo as you travel this summer. Take a close look at the Cybex Aton 2 and see if it works for you and your family.
This is a safety tip courtesy of Mike’s Auto Body, a company that has been fixing cars to their pre-accident condition since 1972, Mike Rose and his family has built Mike’s Auto Body into a 12-shop organization known for its honesty and integrity with an emphasis on exemplary customer service. With two locations in Concord and Walnut Creek and one in Lafayette, Pittsburg, Antioch, Brentwood, Richmond, Fairfield, Napa and now one in San Ramon, Mike’s Auto Body is known for being an outstanding business partner in every city where it serves the public.