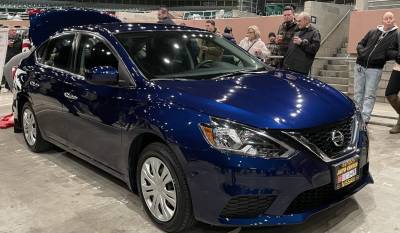 On Dec. 15, Mike’s Auto Body gave away its 100th vehicle through its nationally-known Benevolence Program at a presentation held at the Concord Pavilion in Concord, CA. It was a cold and rainy night, but the power of benevolence kept the crowd of approximately 500 people warm and fuzzy under the covered roof of the Concord Pavilion.

To reach the milestone of 100 vehicles given away, Mike’s Auto Body presented four families with “nearly new” completely refurbished cars.

Enterprise donated a 2019 Chevrolet Malibu, repaired at MAB’s CFS Concord for Josue Hernandez and his family.

The evening kicked off with an invocation and a brief description about the program by Sal Contreras followed by a speech by Owner/Founder Mike Rose. Then, the Mayor of Concord Dominic Aliano said a few words of encouragement and thanked Mike’s for their charitable work for the community. Past recipient Tito Ramos, a Soldier and Family Readiness Specialist of California National Guard who received a vehicle in 2014 spoke. Daniel Herbst, the Director of Sales Replacement and Leisure Division Enterprise Rent A Car then presented a car to Josue Hernandez, followed by a presentation from Dane Dearlove, a retired member of the Mike’s Auto Body team. Kevin Hennessey from Farmers Insurance and Financial Services presented a vehicle to LaTraina King. Tom Donahue, Claims Manager of Liberty/Mutual/Safeco Insurance gave a car to Robert Coston, Jr., Robert Luis, a 2019 past recipient spoke, Sal Contreras talked about CSAA IG’s involvement with Mike’s Benevolence Program, Dustin Cooper, Community Impact Manager for CSAA IG presented recipient Ashley Fox with a car and Sal Contreras offered his closing remarks. CSAA IG has donated 19 cars throughout the years, so we thought it was appropriate to name CSAA IG’s car as the 100th car to be donated.

The Benevolence Program Director at Mike’s Auto Body is Sal Contreras. He admits he has seen every car presentation since the program’s inception, but never grows tired of them.  “It has been so rewarding for the past 21 years, presenting these cars to deserving individuals and organizations who are working to improve their skills and become independent. We always say that at Mike’s, we are providing a hand up as opposed to a handout. These deserving people are working towards making a better life for their families and all they need is reliable transportation to make it happen.

The Mike’s Benevolence Program is an ideal charity model for body shops because it involves the insurance companies, local non-profits Everything is donated, the cars, parts, paint, mechanical inspections, tires, and one full year of insurance. The body and paint technicians donate their time and talents. “We are grateful for this presentation to have Farmers Insurance®, Enterprise Rent a Car, CSAA IG, Liberty Mutual/Safeco Insurance, and Recycled Rides collaborating with Mikes in presenting four refurbished cars to four deserving families,” Contreras said. “As of October 25th, 2021, we have presented 96 cars over 21 years to deserving families, individuals, and non-profit organizations, and on Dec. 15 we gave away four more vehicles to hit the century mark!”

Each year the collision repair industry comes across cars that are “written off” by either the owner or the insurance company. Often, these are older vehicles that just need some mechanical and bodywork to get them back on the road and perfectly safe to drive. Because the people at Mike’s strongly believe that these cars are going to waste when there are people out there who really need them, this MSO with 17 locations in northern California’s East Bay decided to do something about it starting back in 2001.

“We feel very fortunate to be involved with such a wonderful program and are very excited to be able to give back to the area communities that have supported us for the past 49 years,” Owner of Mike’s Auto Body Mike Rose said. “After receiving hundreds of applications over the years and reading the heartbreaking stores, we only wish that we could do more. But hopefully with increased publicity of our Benevolence Program other shops will adopt a similar program of their own.”

Program Director Sal Contreras is known now as the MSO’s “Benevolence Ambassador” because he has been associated with the program since it’s conception, he never tires of the tears of joy that he sees every time someone gets a vehicle—including his own. “The gift of transportation is an amazing thing, and we have seen it transforms peoples’ lives,” he said. “We never get tired of helping others and this program is now part of our DNA. So, we will never stop doing it because we are honored to be in a position like this where we can help so many people in a very tangible way.”

Fixing cars to their pre-accident condition since 1972, Mike Rose and his family has built Mike’s Auto Body into a 17-shop organization known for its honesty and integrity with an emphasis on exemplary customer service. With two locations in Concord, Antioch, and Walnut Creek as well as one in Lafayette, Pittsburg, Alameda, Pleasanton, Brentwood, Richmond, Fairfield, Napa, San Ramon, Fremont, and Vallejo, Mike’s Auto Body is known for being an outstanding business partner in every city where it serves the public.