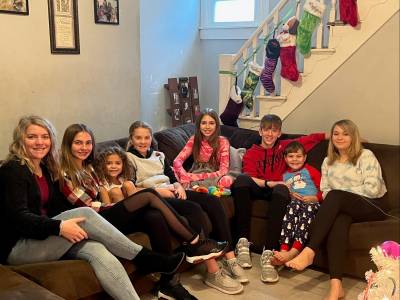 As we celebrate our 100th car giveaway and our 50 years in business, we are going to run a series of articles about a handful of our vehicle recipients through our nationally acclaimed Mike’s Auto Body Benevolence Program. We’re calling them “Benevolence Tales”, where we will focus on a particular family whose life has been significantly impacted by the gift of transportation.

After literally losing almost everything she owned, Kelly Perkins received a phone call from Sal Contreras at Mike’s Auto Body one day that changed her life dramatically in an instant. Perkins, now 40, looks back at that special day and even though it was back in 2009, she clearly recalls it like it was yesterday.

“I was pregnant with my second child back in 2009 when my husband (now my ex-husband) was coming to California to join us from Virginia, where he was stationed while in the Navy,” Perkins said. “We had everything we owned in a U-Haul and right about Thanksgiving as he was traveling through Utah it was stolen. Obviously, we were devastated because almost everything we owned was in that U-Haul, except for a few of my daughter’s things and some clothes.”

Without a vehicle and most of her family’s possessions gone, Perkins reached out to whoever could help her, including the Red Cross. But, things started turning around for Kelly and her family when she contacted the Contra Costa Blue Star Moms, an organization that provides support for active duty service personnel, promotes patriotism, assists veteran’s organizations, and is available to assist in homeland volunteer efforts to help our country remain strong.

“Debbie Burrows from the Blue Star Moms called us and she helped us immediately with things such as things for the baby–diapers, quilts, blankets, and clothes, plus gift cards for other items,” Perkins said. “It was a tough time, but she stepped up and the Blue Moms saved us. We had a great Christmas that year, but at first, it was scary. I still talk to Debbie and she will always be a true friend because she enabled us to make it through it. I talk regularly with Debbie for many years, but now she has moved to Southern California to be closer to her grandchildren. But, if I saw her, I would definitely thank her again for being such a generous and caring person.”

Perkins still gets emotional when she recalls the day when Sal Contreras from Mike’s Auto Body called her to tell her some amazing news that would eventually change her life forever, she said. “Sal told us that we had been selected to receive a Benevolence vehicle and it was a shocker. It was a dark time, but the call from Sal brought some light and then it kept coming in! The people at Mike’s Auto Body opened their doors for us and it was awesome. When we find out shortly thereafter that we were going to get the vehicle, it was amazing.”

Recently, Kelly contacted Sal to find out how she can help as part of the 2022 Mike’s Auto Body Benevolence Program. “I want to partner with some companies here in our area and put together swag bags full of things families need,” she said. “When Mike’s fills the cars’ trunks with toys, food, and household items, it’s a beautiful added touch and when they did that for us, it was so special. So, we want to be a part of that if we possibly can.”

Many car recipients say that after receiving a Benevolence vehicle, it gets them into the giving mood and that’s definitely true with the Perkins family. As a former volleyball star, Kelly is coaching and mentoring 13-year-old young ladies who are passionate about volleyball and her husband Drew is also doing his own form of benevolence, where he gives new shoes to people in need.

Perkins will never forget the day when she and her family received their refurbished 2006 Nissan Sentra at a presentation at Mike’s location in Antioch. “They filled the trunk with toys and household items and all of the kids got brand new bicycles from the fire department. The local news covered the event and it was on TV the next morning. We couldn’t believe the kindness and generosity exhibited by the Rose family and everyone else at Mike’s Auto Body.”

The Perkins combined family has big plans for the future and all of the kids are pursuing different things as they chase their dreams, Kelly said. “Arya wants to be a gymnast; Lincoln is into wrestling and playing football; Addy wants to be a professional soccer player; Scarlett has a 4.0 GPA, plays volleyball, and volunteers everywhere she can; Trystyn plays soccer, runs cross country, and track and has said that he wants to eventually join the military; Bell is already taking college courses while in the 10th grade. She wants to work with animals and is waiting to hear back if she has been accepted to take Equestrian Science and Management or Animal Science and Management while taking college course as well and bowls for the high school varsity team; Alyssa is taking college courses to be an oncology nurse and Karleigh graduated from Eastern High School and is a certified cosmetologist.

In 2013, Kelly had to sell her Benevolence vehicle to get a larger car to accommodate her large family. “We got an SUV, but the Sentra went to a good home–a teenage boy who was learning how to drive,” she said. “It held up so well, we never had any issues with it. That car was like it was anointed to help us and it surely did.” Now the family has two vehicles to accommodate a large family—a Chevy Mountaineer and a new Nissan Murano.

When the Perkins family received their Benevolence vehicle 13 years ago, it motivated them to give back to others in their way in their community, as part of their “pay it forward” approach to living. “We want to do whatever we can to touch peoples’ lives the way Mike’s Auto Body has done for so many years,” she said. “We will be grateful forever and if we can pay it forward and help others, we will, because their spirit of giving is in our hearts and in our souls.”

Today, Kelly looks back at the experience and still smiles from ear to ear. “All of the people at Mike’s Auto Body are on our minds all the time and that’s why we do whatever we can to help others,” she said. “To pay it forward, we gave one of our cars to a woman whose ex-husband took her vehicle and left her and her three children without transportation. The Benevolence Program at Mike’s provides a great example for our kids and it was affected them in so many ways. They will come to us and tell us that one particular child at their school needs some new clothes and we will help them. We definitely feel an obligation to give back because of our experience with Mike’s and we hope that everyone who also got a vehicle will do the same.”