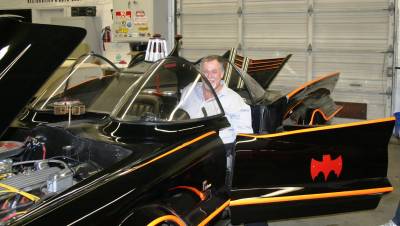 We love our movies and we adore our classic cars, so when the two meet it can be a sweet combination. After talking to car people and polling a few cinema critics, we came up with these Top 5 Movie Cars that have made us laugh and scream and cry over the years! This fun list is brought to you by all of us Mike’s Auto Body, so if you have any entries that we missed, please let us know.

The star of this 1984 film based on the novel by Stephen King featured an evil 1958 Plymouth Fury that communicated through its radio to do bad things…very bad things. Total production for the 1958 Plymouth Fury was only 5,303, and they were very hard to find and expensive to buy at the time. In addition, the real-life Furys only came in one color, “Buckskin Beige”, seen on the other Furies on the assembly line during the initial scenes of the movie. Several vehicles were destroyed during filming, but most of the cars were Savoy and Belvedere models dressed to look like the Fury. Of the twenty cars used in the film, only two still exist; one is a stunt vehicle with a manual transmission and now resides in the hands of a private California collector and the other vehicle was rescued from a junkyard and restored by collector Bill Gibson of Pensacola, Florida.

This successful 1986 film starred a young Matthew Broderick as a popular high school student in suburban Illinois who feigns an illness to score a day off from school, then leads his best friend and his girlfriend on a whirlwind day through Chicago. One of the most memorable performers in the film may have been an automobile: the 1961 Ferrari 250 GT California, a custom-built car revered by auto collectors. In the movie, the restored Ferrari belongs to the strict father of Ferris’ best friend, Cameron whom Ferris convinces to liberate the car from its museum-like home and drive it to Chicago. Later the car is destroyed, but if you haven’t seen the film we won’t spoil it here. For the film, the filmmakers used a modified MGB roadster with a fiberglass body as a stand-in for the Ferrari. The producers reportedly got irate letters from car enthusiasts who believed that a real Ferrari had been damaged.

The Love Bug (1968), sometimes referred to as Herbie the Love Bug, was the first in a series of comedy films made by Walt Disney Productions that starred an anthropomorphic pearl-white, fabric-sunroofed 1963 Volkswagen racing Beetle named Herbie. The Volkswagen brand name, logo or shield does not feature anywhere in The Love Bug, as the automaker did not permit Disney to use the name. Today, only a handful of the original Herbie cars are known to exist. Car #10 was recovered from a warehouse in Pennsylvania, and has been preserved-still sporting its original paint from the movie.

Without a doubt, one of Back to the Future’s unsung heroes is the DeLorean time machine. Built over the course of nearly thirty years and using his entire family fortune in order to fulfill his vision of the “Flux Capacitor”, Doc Brown selected the DeLorean DMC-12 as his vehicle of choice for traveling through time. The DeLorean DMC-12 was the brainchild of automotive engineer John Z. DeLorean, a former executive at General Motors whose most notable contribution was the Pontiac GTO. He founded the DeLorean Motor Company in 1974.

The Ectomobile, or Ecto–1 is a 1959 Cadillac Miller-Meteor limo-style end loader combination car (ambulance conversion) used in the 1984 film Ghostbusters. It features a special pull-out rack in the rear containing the staff’s proton packs and there are also various gadgets mounted on the top, whose function is never revealed in the movies.