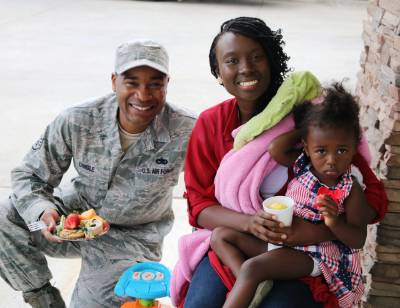 Back in December, Mike’s Auto Body gave away its 100th vehicle through its nationally-known Benevolence Program at a presentation held at the Concord Pavilion in Concord, CA. It was a cold and rainy night, but the power of benevolence kept the crowd of approximately 500 people warm and fuzzy under the covered roof of the Concord Pavilion.

To reach the milestone of 100 vehicles given away, Mike’s Auto Body presented four families with “nearly new” completely refurbished cars.

As part of our “After the Donation” series, we focus on families, individuals, and non-profit organizations who give away cars through NABC’s Recycled Rides Program. Mike’s is a leader when it comes to philanthropy and is nationally known for giving people a hand up as opposed to a handout.

Many of these recipients have decided to pay the benevolence forward and help others in need, and the Dingle family is a prime example of the power of giving.

In November of 2015 Mike’s Auto Body presented a 2013 Nissan Versa to Staff Sgt. Eugene Dingle from Travis Air Force Base and his wife April as part of their annual Benevolence presentation on Veterans Day at the company’s Fairfield location.

At the time, Dingle was a member of the 60th AMXS Squadron and had to commute to and from his assignment at Moffett Air Base as well as getting his children to and from school. Thanks to their completely refurbished vehicle from Mike’s Auto Body, the Dingle family was able to function normally. In addition, the Rose family gave the Dingle family one year of insurance coverage and a trunk full of gifts for the children.

Staff Sgt. Eugene Dingle said that he couldn’t stop smiling when he first saw his 2013 Nissan Versa for the first time six years ago. “It was so miraculous, I still can’t believe it happened even now,” Dingle said. “The people at Mike’s Auto Body and the Rose family are incredible because they make their Benevolence program a priority every year. After receiving these blessings, I realized that I now have a responsibility to help others—to pay it forward.”

Since receiving the vehicle, April and Eugene Dingle have been doing everything they can to give back to their community, and their Nissan Versa has played a significant role in their journey. “Back then, I was the Chaplain Assistant at Moffett Field in Sunnyvale, CA so I had a 1.5-hour commute from our home in Suisun City,” Eugene said. “I was also studying to become a Chaplain at Gateway Seminary in Fremont, and running the religious education programs at Travis Air Force Base at the same time.”

In December of 2018, Eugene transferred to Maryland to join the 175th War Field Wing in Middle River. He now proudly wears two hats—one as an active member of the Air Force and another as an Assistant Chaplain. It’s a role he loves because it allows him to help people as they navigate through their lives in the military.

“It can be a stressful existence and a lot of what I do involves crisis management,” Dingle said. “I offer the men and women I help with 100 percent confidentiality, which is something they appreciate. We do everything we can to keep these people in the Air Force and this can be a very stressful job, but the rewards are many.”

When Mike’s Auto Body gives anyone a vehicle, they first re-condition every part of the car. With 112,000 miles now on their 2013 Nissan Versa, the vehicle is still going strong after a few treks that tested its ability to go the distance.

“When we moved to Maryland, we drove there with the Versa and a van that we purchased. It was a little scary with my wife, the kids, and a dog and it was wintertime. My friends told us to take the southern route to avoid the snow and the mountains, and that was good advice. It took us six days to get there.”

Before moving to Maryland, Eugene and April donated their time generously to Mike’s Auto Body, which included walking in the Veterans Day Parade in Fairfield, CA. In addition, Eugene did the invocation at the Veterans Day presentation and April sang the National Anthem at the 2016 Christmas Presentation in Antioch.

“We feel like we’re part of the family at Mike’s Auto Body now. Sal Contreras and the Rose family have been wonderful to us,” April said. “We’ve become good friends with the people at Mike’s—they’re truly special!”

The car now gets Eugene to and from his job (another 1.5-hour commute) while April uses the van to transport her children to their activities. “The car is a workhorse and we wouldn’t be in the position we are now without it. One of my daughters Ariel is now playing competitive basketball and volleyball, and we are also taking care of our parents who live in Washington D.C. My father Lovair is 85 (former Air Force); and we are also taking care of my wife’s parents (David, 78, and Carlisle, 76). The car gets us to where they live, so we can take them to our appointments, etc.”

One random and wonderful event happened as a result of the benevolence car, Dingle said. “Our little pug named Bishop was an escape artist and one day he ran off and we figured we’d never see him again,” he said. “But, because of the media coverage we got through Recycled Rides and Mike’s Benevolence Program, a veterinarian all the way in New Jersey knew my name when they found Bishop and scanned in a microchip. We didn’t update the contact information, so if they hadn’t known our name from the press coverage, we would have never been reunited with Bishop!”

As seen in Autobody News