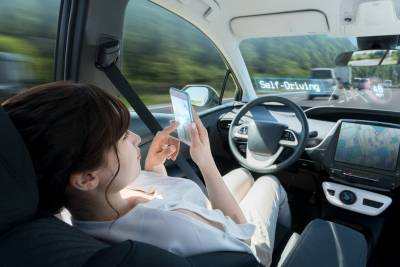 At Mike’s Auto Body we can clearly see that self-driving cars are leading the way. How long will it be until we see autonomous cars on our roads here in the Bay Area? From the information in this blog, it may take longer than most people are anticipating.

This is one that we keep hearing again and again and most people buy into it, but it is a little fantasy mixed in with some wishful thinking. If you look at it,  almost all of the various driver assistance systems in use today operate only for a very limited time and only in highly controlled settings.

People often disagree about whether or not assistance systems should be administered by the driver instead of the vehicle itself. This might work for assistance systems that function for a few seconds or minutes but isn’t practical for systems that drive constantly.  People are not willing to give up the task of driving to a driver assistance system until they are certain that the system can handle all scenarios that can come up suddenly and require prompt action.

This means that driver assistance systems in continuous operation on a highway will need to be able to manage rare situations including pedestrians and cyclists on the highway, impending accidents, animals in the road, abrupt rainfall, etc.

The gradual evolution of these systems isn’t going to work well, because they need to be exceedingly capable from the very first day they hit the road. So, evolution is not a good word in this situation, because peoples’ lives would be at risk during this evolution stage. Systems have to be deemed 100% safe before they will appear in self-driving cars–a process that will undoubtedly take longer than experts are anticipating.

Legend # 2: The first autonomous vehicles will show up in dealerships  and offered for sale to the general public

Unfortunately, this supposition disregards both the difficulties and obstacles that fully autonomous cars will encounter. A major problem will be the infrastructure that will need to exist in specific regions in order to be viable for the average consumer.

Consumers will not buy a car if they can only operate it in limited parts of the country.  Detailed maps will need to be created and continually maintained; algorithms will need to support things such as bad weather versus conditions such as light rain, for example.  Current autonomous cars can function safely in sunny areas with limited rain and without snow. Self-driving cars are ready now, but how long will it take to create all of the other infrastructure and regional mapping systems to make autonomous transportation available to all of us?

At Mike’s Auto Body, we will be here to repair every car, whether it’s a self-driver or a conventional vehicle because we believe that autonomous travel is still many years away from becoming a reality.